Numerous cairns (stacks of stones) can be found on and around the memorial, carefully placed by local citizens, schoolchildren, and visitors from around the globe. Many cairns contain prayers and pay tribute to loved ones. Others are simply a challenge of patience and skill. All add an undeniably mystical element to the park.

The term “cairn” means a man-made pile of stones and comes from the Irish or Gaelic term “carn.” Cairns are found all over the world, and vary in size from small stone markers to hills and large, elaborate and complex balanced structures. In modern times, cairns are often erected as landmarks, a use they have had since ancient times. Since prehistory, they have also been built as sepulchral monuments, or used for defensive, hunting, ceremonial, astronomical, and other purposes.

In August 2010, a 16-year old girl visiting the park had this to say about the Prayer Stones or Carins. Kaya’s Prayer Stone Poem.

Directions to the Park: approximately 1.5 miles north of Ridgway, turn west at RiverSage Drive. Follow the road down and cross the bridge. Park in the lot on the right. R.V. turn-around available. The entrance to the park is marked by a sign “Dennis Weaver Memorial Park,” but you will see the Eagle as you cross the bridge. 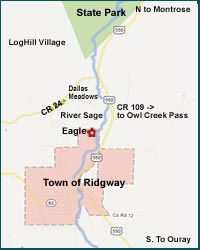 Thank you for your support
Donations are tax deductable